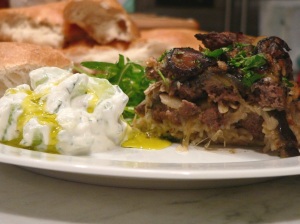 What’s the definition of an optimist? Someone who digs out her copy of Elizabeth David’s Summer Cooking as soon as the thermometer flirts with anything over 15°C. This weekend, I leafed through my old copy, with its stained pages and broken spine, my name written territorially on the title page. I bought it the summer I graduated, when the world was opening up before me, full of delicious possibilities.

That summer, I shared a first floor flat in a large Edwardian terraced house with three boys. Every second Saturday, I trotted down the stairs to the flat below to give our rent to the elderly son-in-law of the entirely ancient lady who owned the building. He looked exactly like Freud. He even spoke with a refined though pronounced Austrian accent. This would not have been quite so disconcerting had the room in which the transaction took place not resembled so closely the study in the Freud Museum just up the road, complete with antique rugs, heavy wooden furniture and strange little bibelots of mysterious origin and sexuality. I was never quite sure if I should hand over the cash right away or lie down on the sofa and tell him a bit about my childhood first.

Our kitchen was so tiny and prone to condensation that, summer and winter, we had to push open the large sash window every time we wanted to do anything more extravagant that make tea. Still, we managed to throw some great parties, tossing the key down on a string from that same window to our visitors below to save ourselves the trouble of the many stairs. One hot August night, I lay in bed listening to the sounds drifting up through my window from neighbouring houses. Soft laughter, the clack clack clack of a type writer and Miles Davis’ Sketches of Spain being played over and over again – fresh from a tiny Scottish university, I thought I was living in the height of bohemian splendour.

Since then, this tatty book has travelled with me from a Moscow tower block to summer rentals in the Languedoc, as well as across several London postcodes. It’s been packed away and then hastily unpacked in increasingly large and better-ventilated kitchens. We’re friends. We have history. We can not talk for months, years even, but when we get back together it’s as though we’ve never been apart, fish kebabs, crab soup, omelette aux fines herbes and apricot ice cream, our lingua franca.

So I was surprised to discover a recipe I hadn’t noticed before, one for Maqlub, the Persian aubergine and rice dish more frequently called maqluba or makloubeh. Its name means ‘upside down’ and truthfully, that’s the only tricky part of making this fragrant and lovely dish – inverting the hot casserole requires a cool head and sturdy oven gloves.

I went to the Turkish Food Centre on Ridley Road to buy my ingredients. I love it there, tucked away behind the market. It’s like being on holiday (without the sadistically small baggage allowance), with aisle upon aisle of intriguing ingredients and some of the cheapest, freshest produce in London. I always end up buying more than I’d planned. I may go in for a jar of tahini, but I’ll come out with rose petal jam, some marinated olives, a packet of sumac, honeycomb, a pot of lebneh, a loaf of pillowy, still-warm flat bread, huge bunches of herbs… Yesterday, I was quite restrained, restricting myself to things for the maqlub, some fresh green almonds and a few loquats to nibble for breakfast. I was very proud that I managed to swerve the vine leaf press, a slab of earthenware with holes in it I imagine intended to keep dolma from unfurling while they’re cooking. But I’ve been thinking about it all afternoon.

Elizabeth David wrote: ‘Although this is rather a trouble to make it is one of the best of all aubergine dishes, and the rice, which has absorbed some of the flavour of the meat, is particularly good. A good bowl of yoghourt can be served with it, and a tomato or green salad.’

I’m giving you this recipe as Elizabeth David wrote it, apart from converting it to metric and making some small details of technique more explicit. When I make it again, I might make a few very small adjustments based upon what I’ve read about maqlub since I made it. I might try making the first layer out of sliced tomatoes and I’d definitely brown the mince in the pan once I’ve finishing frying the onions. Elizabeth David suggests you can use raw or cooked meat and I used raw, which clumped up a bit in the cooking process. I think cooked lamb would combine more seductively with the whole dish. I might add a little more seasoning, a pinch or two of cinnamon and nutmeg and a few grinds of black pepper to the meat, and I might toss a few toasted almonds over the top with the parsley.

Cut the unpeeled aubergines into 6mm slices, sprinkle them with salt and leave them for an hour. Put the rice into soak in water for an hour. Mix the allspice, thyme or marjoram and garlic with the meat. Rinse and dry the aubergines. Heat about 1cm of oil over a medium-high heat and fry the aubergines on both sides until just starting to turn golden. When you have finished frying the aubergines, fry the onions until soft and translucent.

Brush a round casserole lightly with oil. Put a layer of the fried aubergines into the bottom of the casserole (I used a third, so I would end up with three layers), sprinkle on a layer of meat.

Sprinkle with a few blanched almonds and a third of the onions. Repeat until all of the aubergines and meat are used up, and on top put the drained rice. Pour over half of the stock, cover the dish and cook over a low heat for about 20 minutes. Add the rest of the stock and cook for another 30-40 minutes until the rice is almost cooked. Preheat the oven to 180ºC/350ºF/Gas mark 4.

Put an ovenproof serving dish or plate over the pan, carefully turn out the contents of the casserole and put into the oven for another 10-15 minutes. The rice will finish cooking and any liquid left will be absorbed.

We ate it with a few peeled, deseeded and sliced cucumbers tossed in yoghurt with a pinch of sea salt and chopped mint. I trickled a little good olive oil over it just before serving.

TIP
Aubergines. Do you salt them or not? In the past, they were always salted to remove any bitterness and some of their moisture, but with modern varieties it’s not really necessary. I only salt them when I’m going to fry them, as in this recipe, so they don’t soak up quite so much oil – though, be warned, they do still soak it up as keenly as a drunk in a bar five minutes before closing. 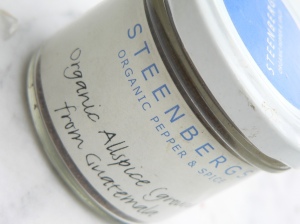 I love Steenberg’s spices, a fantastically extensive range of organic, often Fairtrade seasonings sourced and sold by Axel and Sophie Steenberg in North Yorkshire. They now stock chocolate, vanilla, tea and coffee too.

I was not an original bride. I did my best to convince Sean that our marriage licence would not be valid without being able to show proof of ownership of at least three Le Creuset casseroles. Nearly 12 years later they’re still going strong. Despite being shamefully overworked and sometimes being the object of much incendiary abuse, they’re still perfect – the same might be said for Sean.

Love and a Licked Spoon is written by Debora Robertson, food writer, editor, enthusiastic kitchen botherer and optimistic planter of pretty and edible things. She lives in north London with her husband Séan, a dog, a cat and a mountain of cookbooks and seed catalogues. She is ideologically opposed to rectangular plates. Her latest book, Declutter: The get-real guide to creating calm from chaos was published by Kyle Books in 2018. Dogs' Dinners: The healthy, happy way to feed your dog was published by Pavillion Books in 2018. Gifts from the Garden: 100 Gorgeous Homegrown Presents, was published by Kyle Books in 2012. View all posts by @lickedspoon

This site uses Akismet to reduce spam. Learn how your comment data is processed.