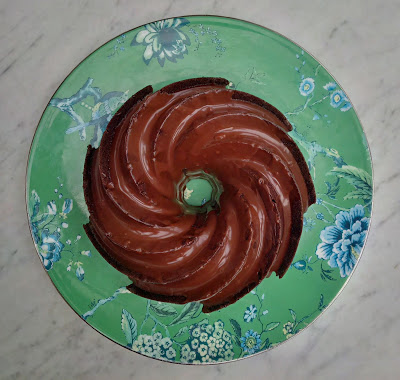 I love the idea of elevenses. I feel a tremble of sadness that it’s now virtually extinct, but then I still write with a fountain pen and keep a dodo as a pet.

The first thing on my To Do list this week was to revive elevenses. The second thing was to have, tantalisingly on Monday at 11am, the first meeting about the food events for next year’s Stoke Newington Literary Festival.

What better reason to bring on the cake than a morning spent talking about books and food, two of my favourite things, with two of my favourite women? Julia, Chattanooga’s finest daughter, is one of my dearest friends and absolutely the sort of person you’d want by your side at the barricades. If your speaker were to arrive late, drunk and naked, she wouldn’t bat an eye. And Liz founded the festival five years ago on a hunch and a credit card. She’s a force of nature whose modesty is matched only by boundless sense of what’s possible. If anyone deserves cake it’s these two. I’m making them founder members and trustees of my Elevenses Revival Society, an arduous responsibility but I think they’re up to it. 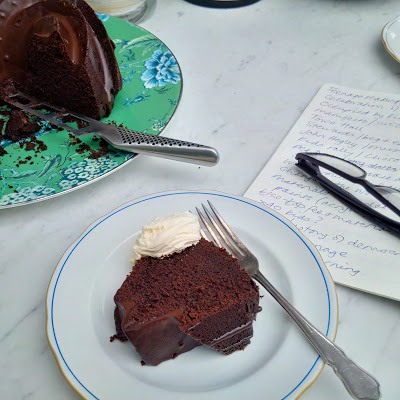 I used dried morello cherries in this cake because I love them and I throw them into as many things I possibly can, from breakfast porridge to salads and cakes. If you don’t have them or don’t like them, cranberries, raisins or sultanas would also be good. You could substitute brandy or sherry for the kirsch, too.

When I posted a picture of this on instagram, a lot of people asked me about the plate. It’s Chinoiserie Green, a design that Jasper Conran did for Wedgwood a few years ago. It was a birthday present from my best friend Victoria and remains a great favourite of mine.

Put the cherries into a small saucepan and pour on just enough kirsch to cover. Bring to a very gentle simmer, then simmer for a couple of minutes. Remove from the heat and let the cherries fatten and cool completely.  You can leave them for several hours if you like. Drain the cherries, reserving the liquid. Gently pat them dry with kitchen paper.

Preheat the oven to 170°C/150°C Fan/Gas 3. Grease a 2 litre Bundt tin with butter, sprinkle with flour, place in a plastic bag and shake shake shake until every part of the tin is lightly coated with the flour. Tap off any excess. Alternatively brush with Wilton Cake Release – this stuff is great for intricately shaped Bundt pans.

In a bowl, whisk together the flour, cocoa, bicarbonate of soda, baking powder and salt until very well combined and light, with no lumps. Sprinkle a couple of tablespoons of the mixture on a plate and toss the cherries in it lightly to coat.

In a separate bowl or a jug, whisk together the milk, sour cream and 1 tbsp of the reserved kirsch.

In a stand mixer with the paddle attachment (of course you can do this in a large mixing bowl with a wooden spoon), beat together the butter and sugar until light and fluffy. Add the eggs one at a time, beating well after each addition. Beat in the orange zest.

With the mixer on very low, beat in a third of the flour then half the milk mixture, then repeat, ending with flour – be careful not to overprocess the mixture or the cake will be tough. If the mixture seems a little stiff, add a splash or two of milk until it has a consistency which drops easily from a wooden spoon. Fold in the cherries with a spatula.

Spoon the mixture into the pan and smooth the top with a palette knife or the back of a spoon – it shouldn’t come more than two thirds of the way up the tin. Bake for 65-70 minutes until a toothpick inserted into the thickest part of the cake comes out clean. Cool for 10 minutes in the tin. Remove the cake from the tin then place on a cooling rack lined with a sheet of baking parchment. Cool completely.

When the cake is completely cold, make the icing. Place the chocolate in a heatproof bowl. Bring the cream to a simmer in a small saucepan. Pour the cream over the chocolate and leave to stand for a couple of minutes. Tip the butter and 2 tbsps of the remaining reserved kirsch (just swig any that’s leftover – it’s delicious) into the bowl and mix until smooth. Leave for a couple of minutes so that it thickens slightly. Pour over the cake and let the icing set before serving in thick slices, ideally at 11am.