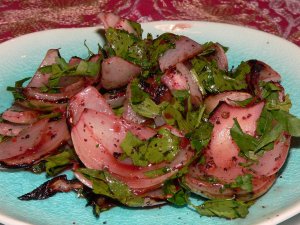 There’s a great Anatolian restaurant near us. My friend Ali used to live next door. Early one evening, her boyfriend Brendan managed to julienne his thumb while preparing dinner so Ali dashed round to her neighbours to see if they had a first aid kit she could plunder in an attempt to stem the bleeding. The chefs, busy prepping for that evening’s service, didn’t really understand what she was saying, ‘My boyfriend’s nearly cut his thumb off, do you have a plaster or a bandage?’ didn’t feature heavily in their Turkish-English phrase book, especially when delivered in a high-pitched, increasingly frantic New Zealand accent.

In desperation, she started miming, throwing out odd words here and there ‘Boyfriend’, ‘knife’, alongside lots of hacking and sawing motions. Suddenly, a dawn of recognition appeared on one of the cook’s faces ‘Ahhh, I know, I help you!’. He came back with the biggest knife she’d ever seen, carefully wrapped in a tea towel. She was very touched to have found such a willing and gracious accomplice in what he clearly thought was her plan to polish off the luckless Brendan.

If they’ll go to such lengths to help their customers do in their other halves, just imagine how seriously they take your dinner. They make the best grilled onion salad ever, one about which I fantasise when far away from home. It’s not on the menu – it comes free with your main course. I’ve been known to order a nicely grilled quail or sea bass or a couple of juicy lamb chops just to enjoy its spicy, sweet and smoky charms. It’s a side dish with aspirations, in this case the understudy is the star, it’s the Peggy Sawyer to the kebab’s Dorothy Brock and it’s getting to be a habit with me.

This is my attempt at recreating the ‘Salad of Dreams’ – if you make it they will come. One of the ingredients in the dressing is şalgam suyu, described as turnip juice, but really a combination of turnips and violet carrots, pickled and fermented in barrels. As well as using it in salads, it’s a popular drink, served very cold with a dash of paprika sauce. It’s supposed to be a good hangover cure. You’d be forgiven for thinking that, like the Prairie Oyster, that fiendish combination of raw egg, Worcestershire sauce, salt and pepper, it works on the principle that you can distract yourself from your wretched state by drinking something completely disgusting.

I know, I know, I lost you at turnip juice, but please persevere. If you can’t get şalgam, you can use a few spoons of the juice from a jar of pickled gherkins to get the essential sourness.

Prepare the grill and get the coals nice and hot, so they are glowing red underneath with a fine coating of grey ash on the top.

While the grill’s heating up, whisk together the molasses, şalgam, lemon juice and olive oil to make a lovely glossy, red dressing, the kind of thing that might tempt a health conscious vampire. Season with the paprika and a little salt and pepper.

Thread the onions onto a skewer and brush them with a little olive oil, sprinkle salt over them and grill for about 4-5 minutes per side until gently charred around the edges. Carefully remove them from the skewers and toss them in the dressing. It seems like a lot of dressing – don’t worry, you want lots so you can mop it up with chunks of bread.

Remove the leaves from the parsley and roughly chop them. Sprinkle over the onions with the sumac and chilli flakes and toss together well. Serve warm, with steak, kebabs, grilled chicken or by itself.

TIP
If you’re using wooden skewers, you need to soak them in water for 30 minutes before cooking so they don’t burn. In the summer, I soak loads and keep them in a bag in the freezer for those moments when I need some instant grill gratification.

APOLOGY
Sorry to ladle heaping spoonfuls of 42nd Street references into a piece about onions, but there are things you should know about a person before you embark on a serious relationship, like a passion for paint balling or a propensity for cross dressing. In the spirit of full disclosure, I’m addicted to show tunes. There, I said it.

Love and a Licked Spoon is written by Debora Robertson, food writer, editor, enthusiastic kitchen botherer and optimistic planter of pretty and edible things. She lives in north London with her husband Séan, a dog, a cat and a mountain of cookbooks and seed catalogues. She is ideologically opposed to rectangular plates. Her latest book, Declutter: The get-real guide to creating calm from chaos was published by Kyle Books in 2018. Dogs' Dinners: The healthy, happy way to feed your dog was published by Pavillion Books in 2018. Gifts from the Garden: 100 Gorgeous Homegrown Presents, was published by Kyle Books in 2012. View all posts by @lickedspoon

2 thoughts on “I’m addicted to your charms”

This site uses Akismet to reduce spam. Learn how your comment data is processed.